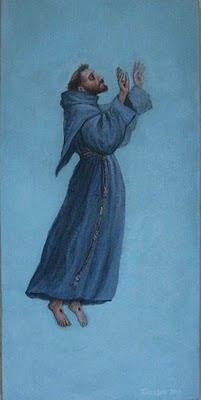 St. Francis Levitating - Terry Nelson, 2010
6" x 12" Acrylic on canvas
.
I adapted the figure of St. Francis from an old master painter, whose name I can't recall - I'll update this when I come across the origins. I wanted to show St. Francis in a habit similar to that of the Friars of the Immaculata. 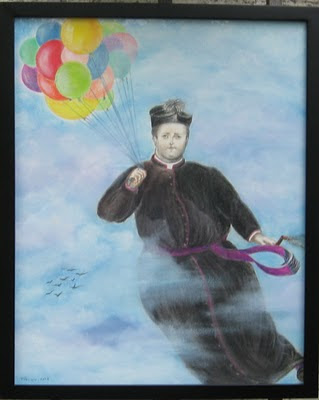 I once titled this the "Apotheosis of Fr. X" - although a couple of people some how assumed I was making fun of Fr. Z. I hate it when that happens. In reality it is a story about an unfortunate Brazilian parish priest who made a balloon trip to raise funds for his parish and became lost at sea. Sadly his remains washed up on the coast line several days (or weeks) later. I can't recall the exact details of the story now. I recently refined the cloud cover with oil stick glazes. The photo of the painting was shot with hand-held camera outdoors.  I know nothing about photography. 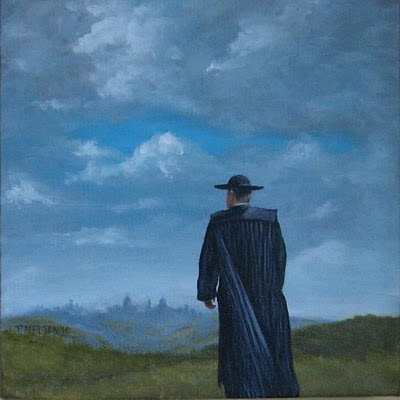 I just painted this yesterday.

Out For A Ride 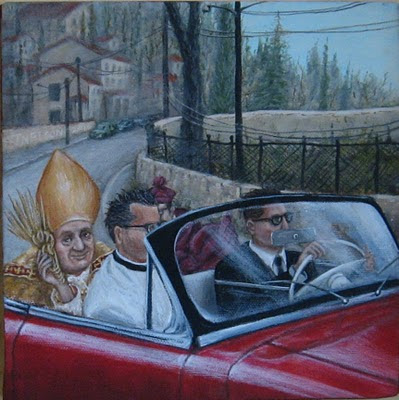 Inspired by a photograph I came across online, I found the composition humorous enough to document. Imagine the soundtrack from La Dolce Vita as you view this.