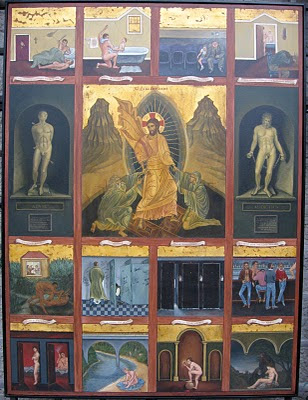 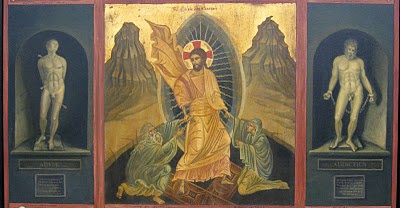 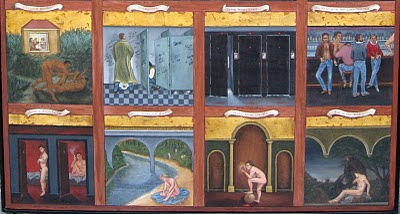 Descent Into Hell, Terry Nelson  1990
Acrylic, gold leaf on canvas (36"x48")﻿
I finally re-photographed this piece after so many years.  (The photography is not done well - I shot it outside on a cloudy day and the canvas appears warped - or the problem may be the mount on the surface supporting the panel - either way, it's off.)  I painted it in the style of an 'altar-piece' or a classical icon with scenes from the life of, which is why I sometimes like to subtitle it "A day in the life of..."  Most people ask why I used the lyrics and titles from the Beatles' Abbey Road album throughout the piece.  Aside from the fact I found the medley and lyrics of some of the songs on the album to fit whatever I was documenting at the time, I also listened to the album obsessively while painting.  (If you click on the photos you may be able to read the titles on the close-up.)  Abbey Road has been important to me since its release, and the painting was an intense project for me - that's all I can say.
The panel documents a difficult life and the subjects attempt to understand it.  The two allegorical figures in the niche on either side of the title panel - The Descent - Sebastian and Samson respectively, represent two related curses:  abuse and addiction.  I used classical anatomical figures for the 'statuary'.  St. Sebastian was first martyred by being shot with arrows - left for dead - he subsequently revived to face a martyr's death later.  It is with that understanding Sebastian was chosen to represent the effects of abuse, and specifically sexual abuse, which can be likened to a sort of death of the spirit in those who experience it. Samson has often been referred to by spiritual writers and in allegory as an example of the soul enslaved by sin, or as secular culture describes in modern psychological terms, addiction.
Without going into much more detail, let me just say the panel isn't meant to be described in total for the viewer, except to point out that each scene represents/documents an aspect of abuse, molestation, seduction, temptation, rape, sin, isolation, alienation, dying, conversion, confession,  and finally reconciliation .

Note:  The painting was in the collection of a former gallery owner who is now deceased.  His estate returned the panel at my request.  The panel is currently scheduled to become a part of the private collection of a collector of outsider art.

My apologies to those offended by the subject matter.
Posted by Terry Nelson at 1:21 PM 6 comments: