A new painting in the works.

I've been working on it for months and now it is at the point where I think I can give a preview.  Two photos - snap shots - give a hint what lies beneath the over exposed image... 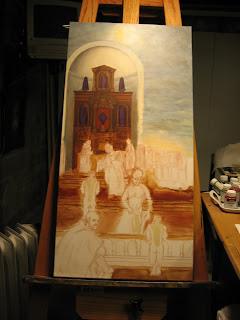 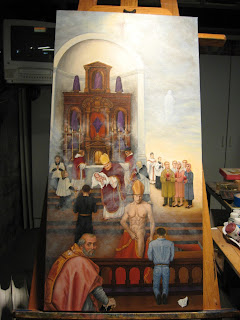 The work remains unfinished, but this is a narrative I posted in the com box at my other blog where the painting is shown: 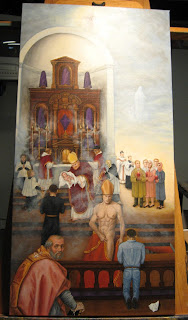 Briefly, all I can say is that the dream remains rather vivid in my memory and I never fully understood it until after the clergy scandals. At first I had thought it was diabolic - a nightmare - mocking the Church, as well as a temptation against the Church. Over the years I understood it differently.

In the painting, I lightened up on how the 'bishops' depicted really appeared in the dream. The bishop holding the child was much more creepy, and he always suggested to me two things, the tolerance of abortion and contraception by churchmen, as well as the sexual exploitation, disregard, and sexual abuse of children. As I said, the bishop is toned down in the painting - in the dream he was wearing garish make-up and his fingernails were painted, and he was especially effeminate. The image was so repulsive, I neutralized those aspects for the painting.

The naked man partially dressed 'as a bishop' represents homosexuality in the clergy. In effect, he is a bishop's boy toy masquerading as a minister of the Eucharist. He illustrates the corruption in the Church, the lack of faith in the Eucharist and the sacraments, and the emptiness of decorum without a living faith.

The ordinary people are the faithful and they look to the apparition of the Virgin, making intercession with her to the Trinity. before my conversion I often dreamed of Our Lady, yet I could only see her form from the back.

The smoke is incense, yet later I wondered if it wasn't the camouflage of the 'smoke of Satan' as PPVI mentioned - masking the filth in the Church.

There is no Mass being celebrated - just clerics going through the motions at the altar. The statues are covered as for Lent, while it is a call to penance, it also represents the eclipse of solid Catholic teaching and tradition as well as devotion. The Trinity remains present none the less, the Father offering the Son in the Holy Spirit - if you could see closely, the Father's body conforms to that of the Crucified - it is a sign of the Father's love and a pledge of redemption.

The church interior is an interpretation of a downtown parish church I once attended regularly. Later on, a more or less dissident bishop became the pastor there.

This is a brief explanation - the meaning is multi-layered and complex. I painted it to work through some things and to put them in perspective. The fact St. Nicholas - an image I borrowed from another artist - the fact he is present as the patron saint of children and orthodoxy speaks for itself.

I painted in oil technique, so layering colors, washes and glazes was important. I still have things to add in the composition, but I'm taking a break from the panel for now.

I hope this answers your questions.

I just read this which corresponds with my dream:

On Christmas Eve 1813, Bl. Elizabeth was transported in ecstasy to a place refulgent with light. There she saw countless saints in adoration before a humble manger. The Infant Jesus signaled her sweetly to approach, but on drawing near she saw that He was soaking with His own Blood.
“Just the thought of it fills me with horror” she wrote. “But at the same time I understood the reason for such shedding of blood was the bad habits of many priests and religious who do not behave according to their state in life and the bad education given to children by their fathers, mothers and others entrusted with this duty. They, who should increase the spirit of the Lord in the hearts of others by their good example, instead mortally persecute Him with their bad conduct and teachings.” - Source


The infant in my dream was bloodied  and distorted - like the infant in Bl. Elizabeth's vision.  I will amend the painting which has remained unfinished until now.
Posted by Terry Nelson at 10:48 AM 6 comments: