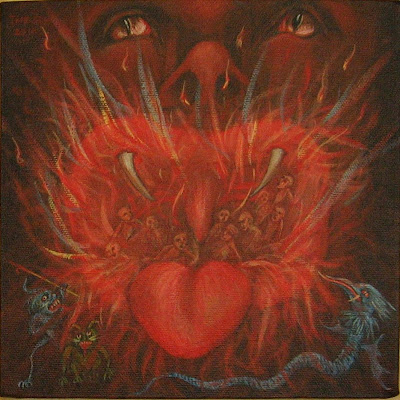 Untitled - Terry Nelson 2010
Acrylic on 8 x 8 canvas.
.
My apologies that the colors are so washed out - it was difficult to capture the panel with my little camera. 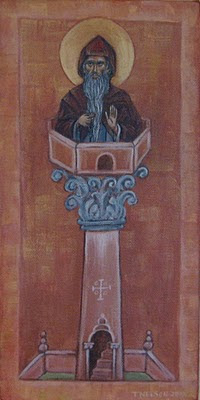 Another painting of an icon depicting a type of early ascetic. A type of stylite monks descended from this saint, the first recorded to have lived an ascetic life atop a pillar. According to early accounts the reason Simeon adopted the life of a pillar ascetic was to avoid the crush of people who sought his prayers and advice. Since he couldn't flee to a more remote spot, he ascended. The pillar was raised over time to sixty feet, holding a twelve foot square platform, surrounded by a balustrade. The saint's meager ration of food was raised by basket, while the needs of nature were said to have been relieved off the side as needed. The saint is said to have lived thirty-six years atop the column.
.
Luis Bunuel made a film based upon the saint's life. An atheist, Bunuel was impressed with the authentic, albeit radical faith of the early desert saints. In his film he pulls together much of the wisdom expressed by the writings of the early desert fathers, creating a remarkably accurate depiction of the spiritual combat engaged in by the early ascetics. Interestingly enough, the film ends with the saint transported into modern society amidst a noisy disco. It is a scene at once evocative of some of the temptations of the early desert fathers, as well reminiscent early prophecies regarding monastic life in the later times, not to mention the secular intellectualism which seemed to dominate institutionalized monasticism after the Council. 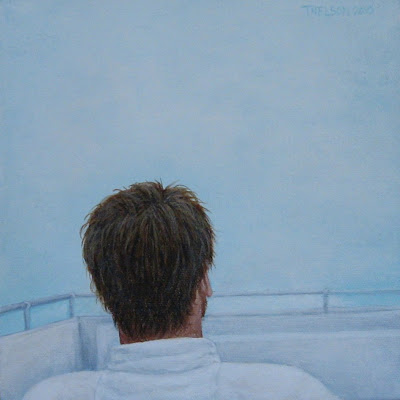 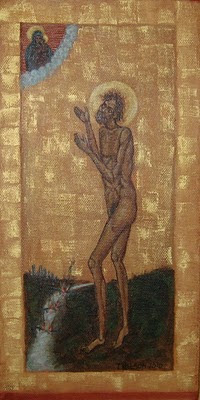 An exercise in daily painting, I spent less than 3 hours on this - preliminary sketch included. I painted it after an icon of St. Basil the Fool for Christ. The backdrop is a stylized view of Minneapolis from the St. Paul side of the Mississippi river. The burned bridges are an obvious metaphor.
.
Actually, the painting is meant to be something of a 'spiritual' self-portrait, as such, the entire composition is metaphor. 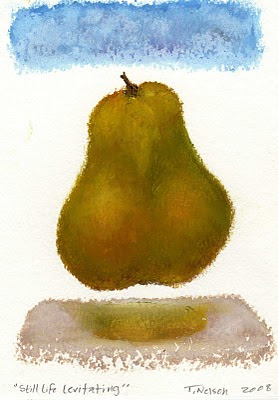 Still Life Levitating, Terry Nelson
Oil stick on paper.
.
I did this in 2008 - so you see how long I've been thinking about painting things levitating.
Posted by Terry Nelson at 8:14 PM 4 comments: