Getting ready for Christmas ....

I haven't had any inspiration to paint, so I've been exercising my talents with crafts and homemade Christmas cards.  Not my best work - partly because of disabilities - but I wanted to do something non-religious Christmas...  Here a few images some readers may relate to: 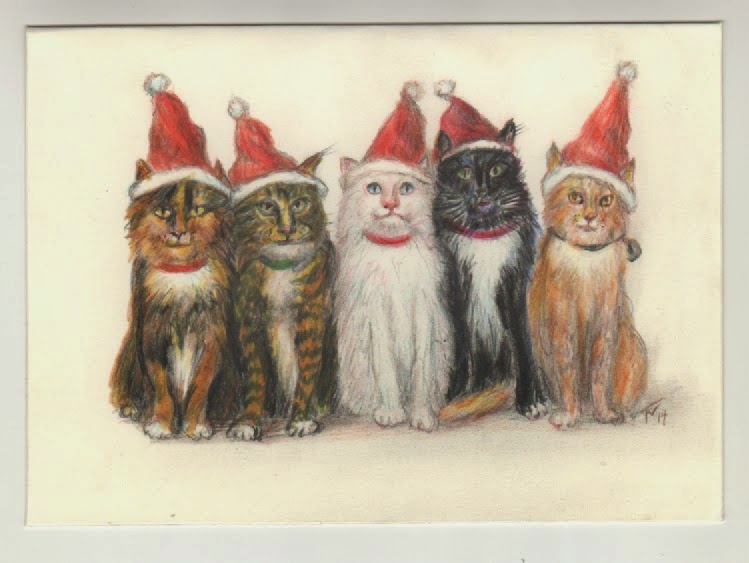 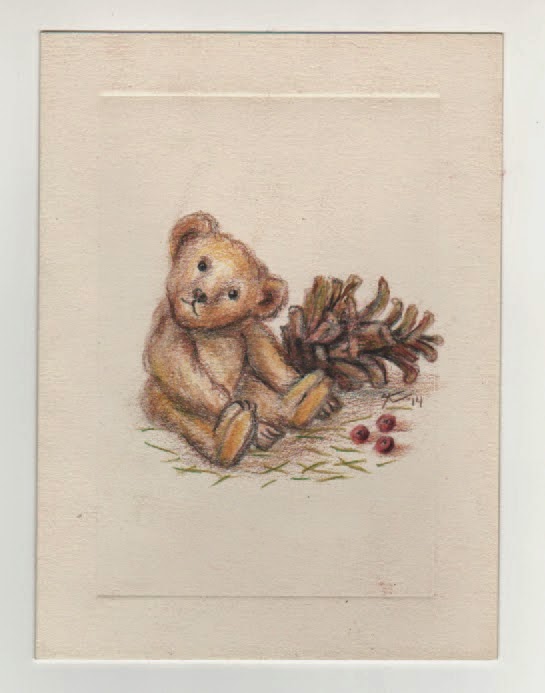 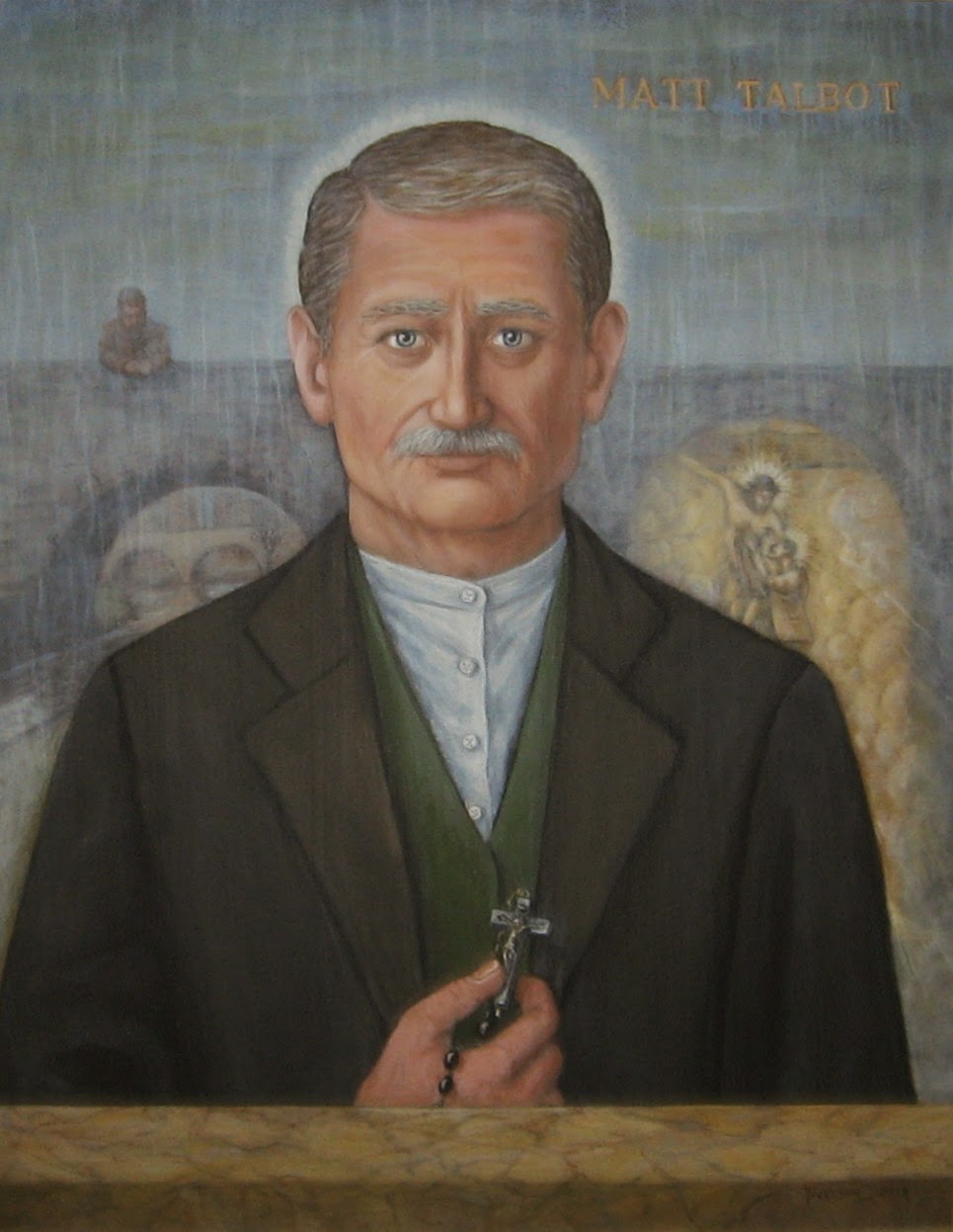 I toned down the background, added a ledge in the foreground, as well as his name.
Posted by Terry Nelson at 8:48 AM 3 comments: 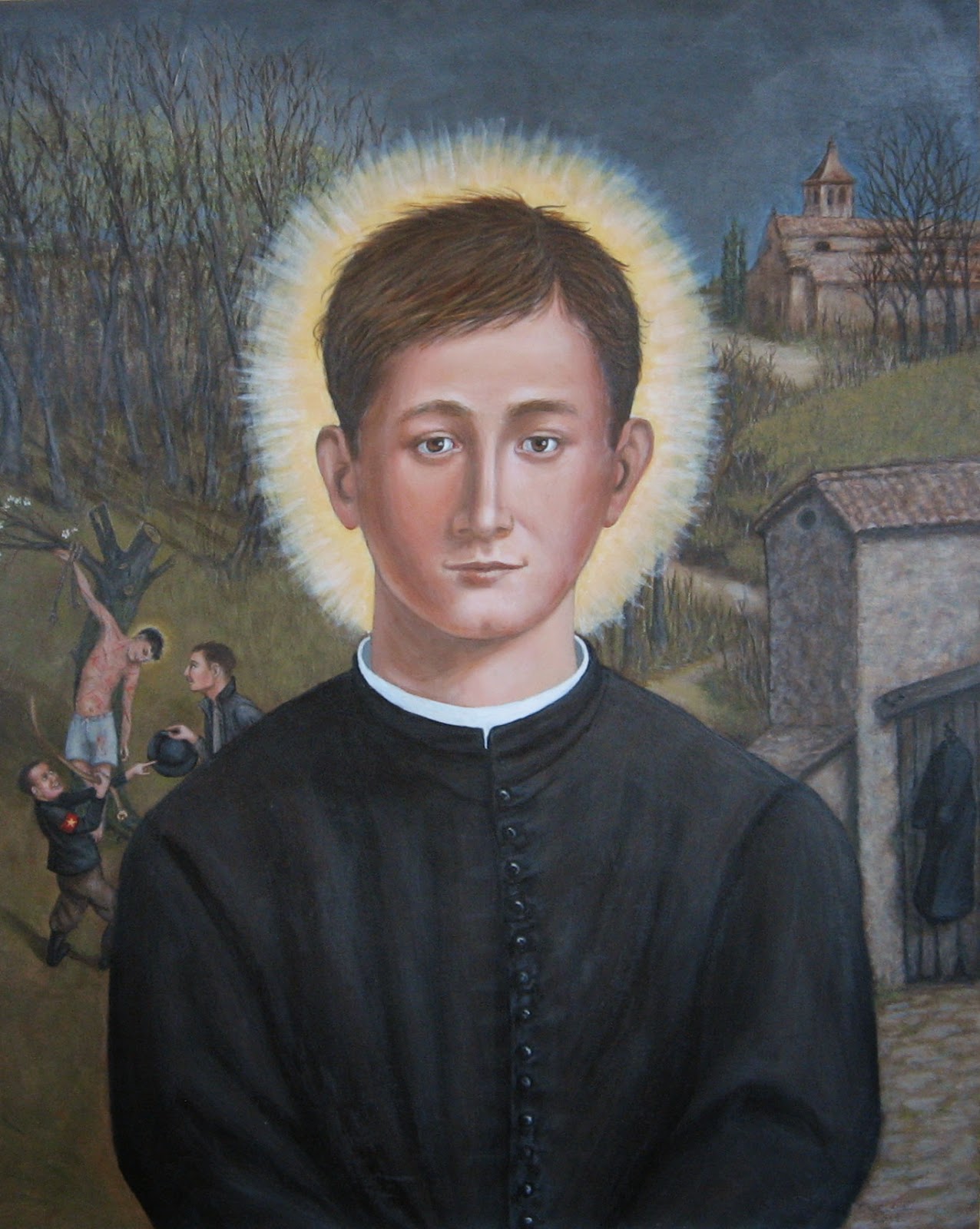 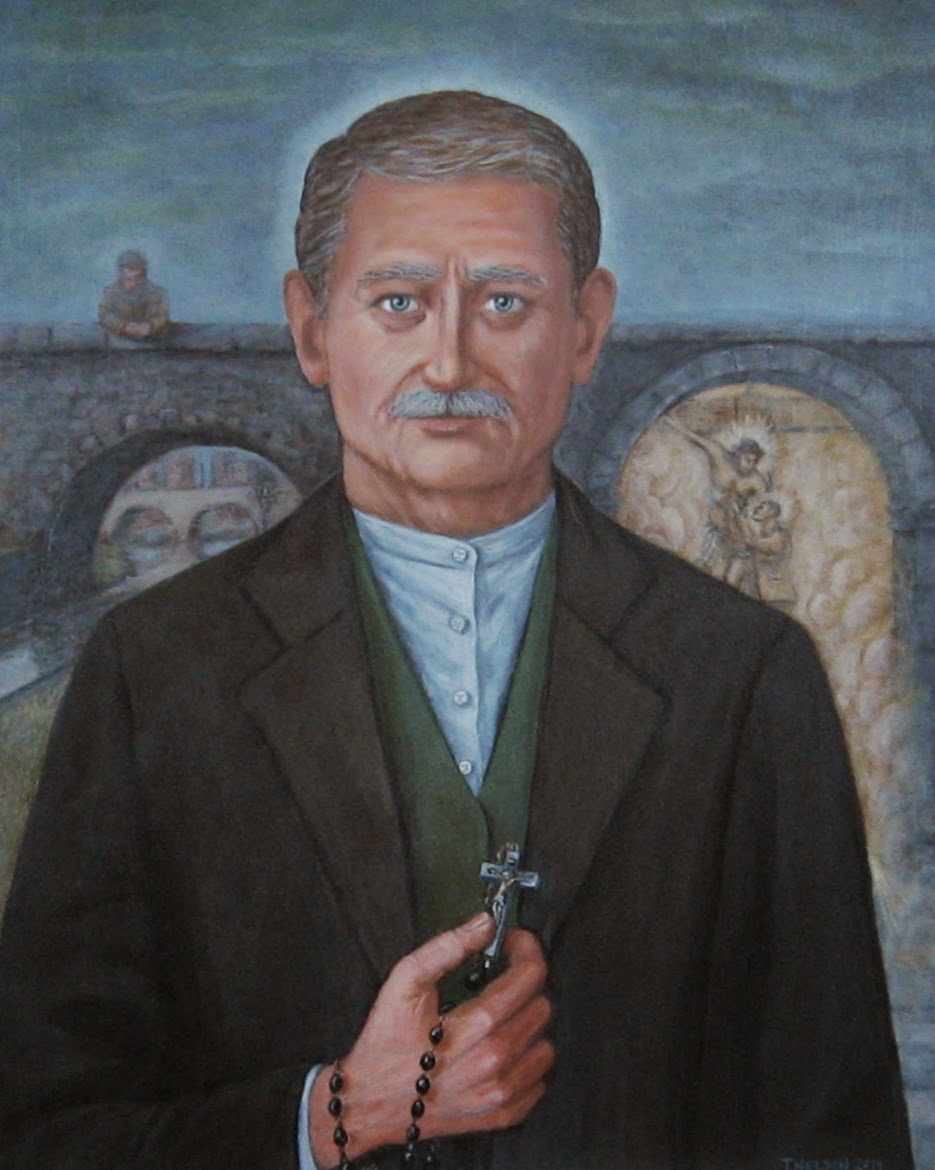 A young Italian seminarian abducted by Communist partisans in Italy during the War, he was murdered out of hatred for the faith.  The panel depicts the place of his torture and murder in the wood, and how the insurgents mocked and bullied the fourteen year old for wearing his cassock.  The Blessed is tied to a tree suggesting his torture and beating with a belt.  The tree is cut off, symbolizing his own young life cut short, while the branch he is suspended from blossoms in new life, his own martyrdom the seed of new life for the Church.  After his death and burial in a shallow grave, the insurgents hung the cassock from a farm house door as a trophy,  The church at the top is the church of Rolando's baptism - emphasizing the relationship of religious life to baptism, as well as martyrdom.  Read more on Bl. Rolando here.


Who is Matt Talbot ?   Matt Talbot is a man who discovered the joy of recovery from addiction through a deep sense of self- awareness and spirituality.  He has become a model for "12 step" recovery even though his healing preceded the more defined development of "12 steps" in the mid 1930's.

Matt Talbot was born on May 2, 1856 in Dublin, Ireland.  He was one of twelve children born to very strict parents.  Until he was twelve, Matt attended a Christian school.  At the age of twelve he began working as a messenger boy for a wine merchant.  This period was the beginning of Matt's troubles with drinking.
By the time Matt was seventeen and a bricklayer's apprentice, he was a habitual drinker.  At the age of twenty-eight, after a week of irresponsible bingeing, Matt found himself destitute.  He had run out of money and was plagued by an inner craving for just one more drink.  He went to his favorite bars and begged his "so called" friends to give him just enough money to buy a drink.  His "friends" mocked him and ignored his pleas and beyond that did everything to avoid him.
It was after this devastating experience that Matt realized he needed to change.  He hit bottom.  He knew he needed to find a way to stop drinking.  He became aware that he was powerless over alcohol and that his life was incredibly unmanageable.  It was in this state of awareness that Matt somehow realized he needed to call on his higher power (God) for help.
For his spiritual strength, he practiced deep meditation and prayer.  He turned his will and his life over to the care of God.   In addition, Matt made a commitment to stop drinking one day at a time.  He vowed to keep his commitment first for just three months, later it was six months and then for life.  Without question it was a struggle but because of his commitment, his profound self-awareness and his deep spirituality, his recovery gradually became permanent and complete.
Matt Talbot died on June 7, 1925.   He is remembered as an extraordinary man of simplicity.  A man marked by holiness and a profound commitment to recovery from addiction.  A model for others to follow.    - Source


In this painting I depict Matt around the age he died, he is holding a rosary indicating his devotion to Our Lady and the means of his overcoming addiction.  I relied upon the sculpture of Matt in Dublin (here) and the only known photo of him (here) to capture the likeness I produced in my painting.  In the background is a facsimile or impression of Newcomen Bridge crossing the Royal Canal, at the moment when he decided to stop drinking at the age of 28.  On the other side - as if completing the bridge - which symbolizes conversion, we see the door of a church, within Matt being embraced by Christ.  This is suggestive of the doctrine of St. Catherine of Siena who understood the cross - or rather Christ Crucified - as the bridge between men and God. 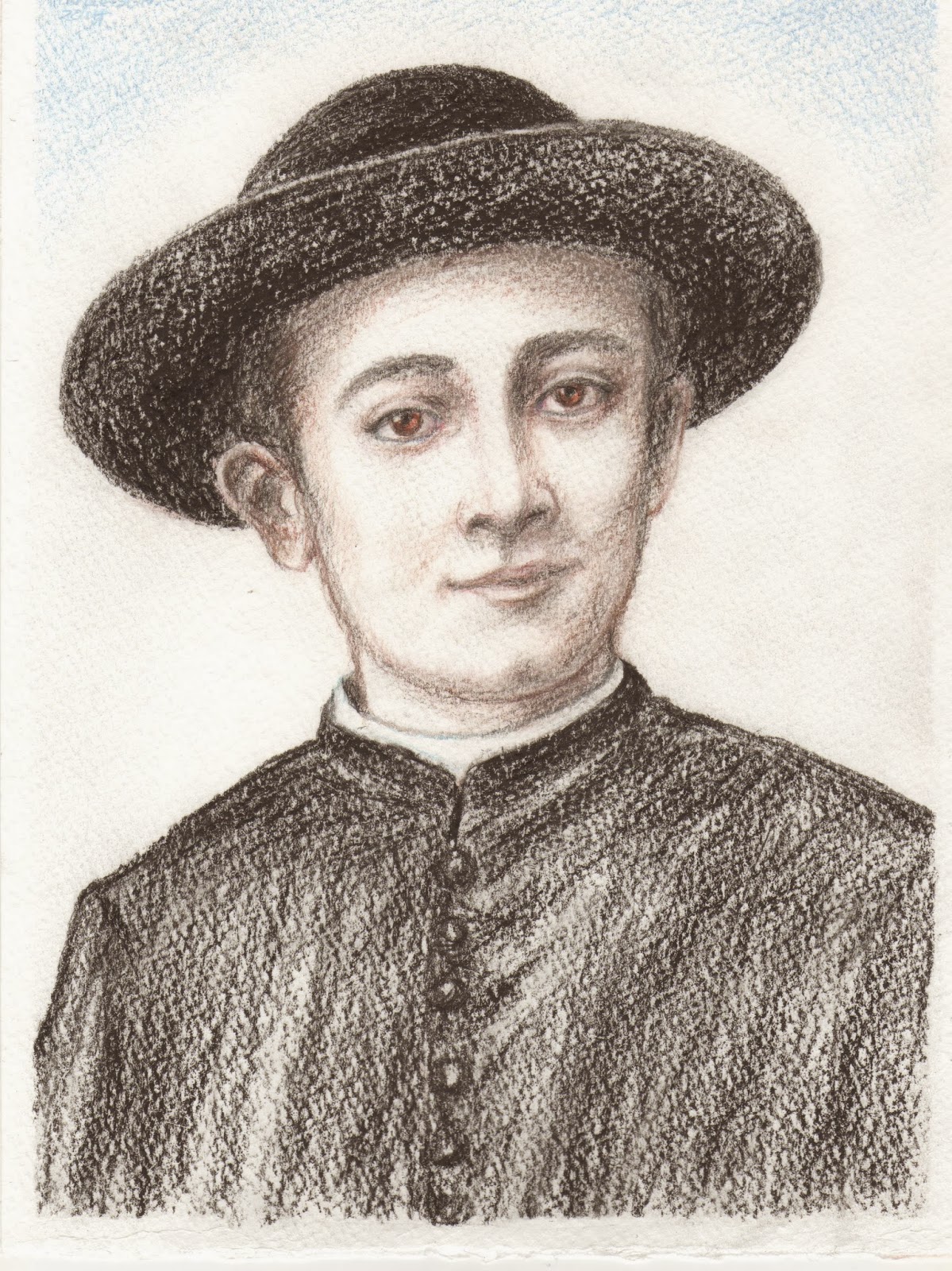 Posted by Terry Nelson at 9:55 AM No comments:

Study for an icon.

Posted by Terry Nelson at 3:07 PM No comments:

Virgin of the Apocalypse 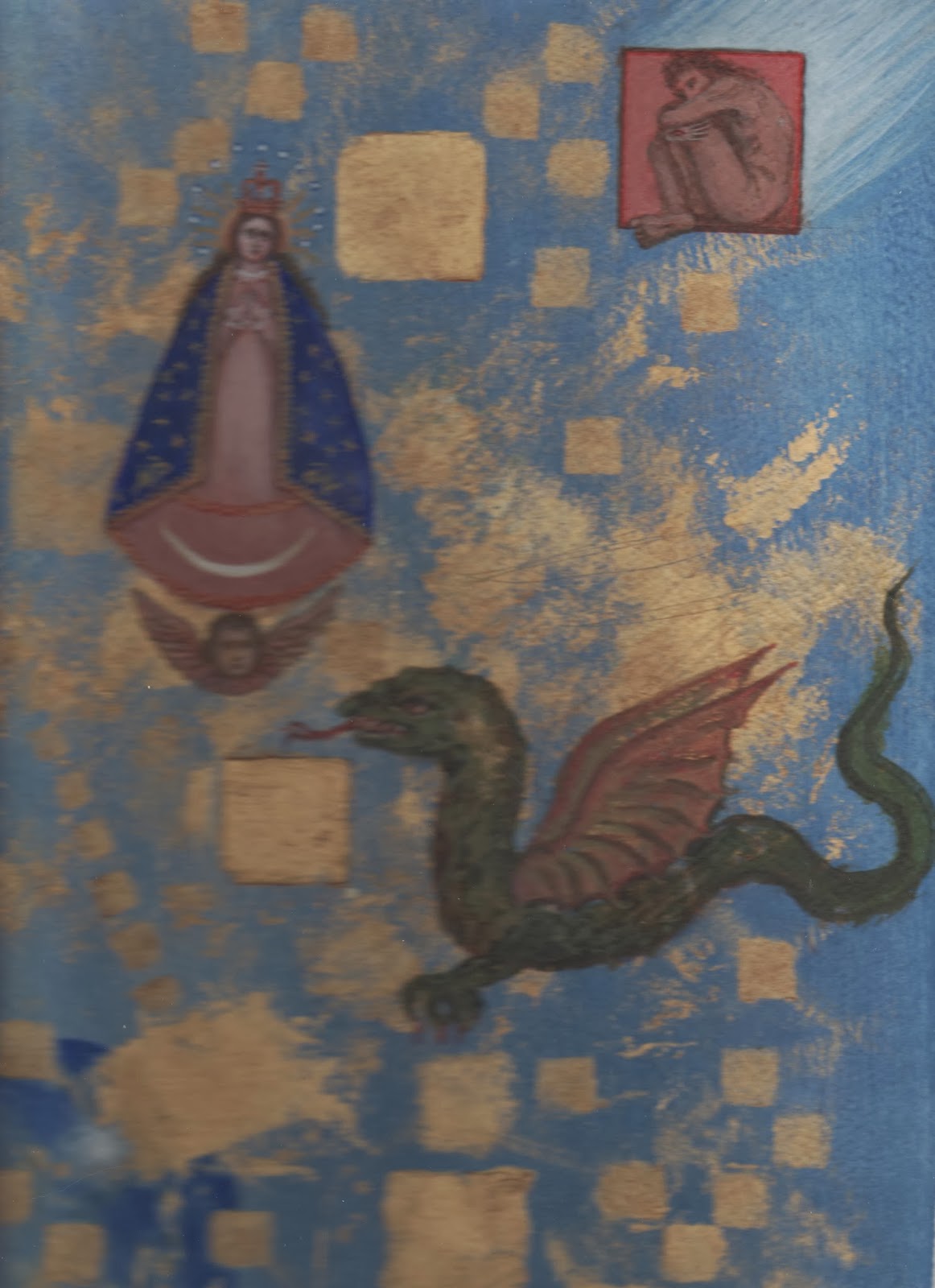 My first finished work of the new year.  It is too large for the scanner and floats slightly above the window, which causes the image to be blurry and dark.
Posted by Terry Nelson at 12:38 PM 2 comments: