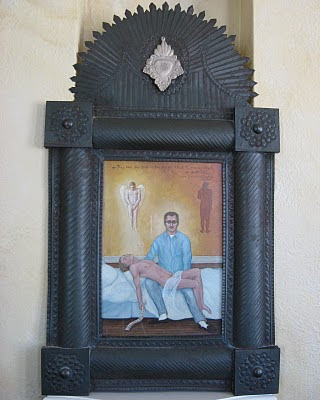 "When Jim died" - Terry Nelson
11 x 14 acrylic on clay board in tin Mexican nicho.
.
I did this retablo/ex-voto quickly, in memorial of my friend Jim, who had died suddenly several years ago.  I was asked for another piece to exhibit in a gallery show I was participating in.  The panel had been started awhile back and set aside, so I decided to finish it in a hurry the night before installation.
.
Jim was part of my "group" - several friends who have remained friends since high school. Jim was the first of us to die, and it was very hard to take since he was still in his 30's. He always seemed like an angel to me. Friends told me he died from an asthma attack during the night. I had lost close contact with him after I returned to the Church in 1972 - he had become involved with Mid-Eastern spirituality and rejected Catholic teaching - and me for awhile. Later on when we did see one another we continued to have great fun - he was very funny, an accomplished classical musician as well as an artist, and a huge fan of the Beatles and The Who. Jim was going to marry a friend of ours until he realized another attraction in his life.
.
The painting is crude and a part of my retablo/ex-voto collection... rotting in the basement. The plumber seems to enjoy them.

I am so sorry for the loss of your friend. May he rest in peace. The "pieta" position is very expressive of your high opinion of him.

The frame is fabulous--did you make it?