St. Jospeh and the Child Jesus 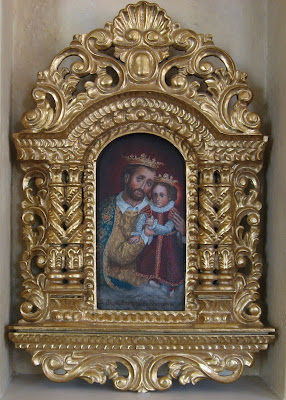 Retablo: St. Joseph Refuge of Sinners - T. Nelson 2010
.
9.5" x 5" Acrylic on canvas in Cuzco style carved mahogany and gilded frame.
.
Several years ago I acquired this tabernacle-style frame with a painted image of the Divine Mercy, the image was so badly painted I gessoed over it and decided to paint another. In the meantime I framed a holy card image of the Divine Mercy in a small tin nicho, and this suited me more than this elaborate frame. I then decided to paint a Spanish Colonial style retablo for the frame instead, although I never returned to do it until last week. As March was approaching I decided to paint my patron, St. Joseph of the Child Jesus.
.
Though I am not Carmelite, I wear the scapular of Our Lady of Mt Carmel, and venerate St. Joseph under the title of Protector of Carmel*, which is a sort of subtitle for this image which is officially titled, "Refuge of Sinners". The prototype for the retablo was an image I once saw in a magazine with the same title, although in the case of this painting, I worked from my imagination. The style of the composition mirrors the images of Our Lady under the same title, "Refuge of Sinners".
.
The image is Cuzco-school inspired, although I used no gold assiste (painted gold lining and hi lights) for the patterns on the clothing, and my brush work is not nearly as fine as Latin American works.
.
*On St. Joseph's mantle one can notice an abbreviated coat of arms for Carmel as well as the monograms of Jesus and Mary.  And yes - the image is rather "Royalist" or "Monarchist" - ah, what does that reveal about my true self, huh?

Incredible! Who needs words when you have this? Poetry is my passion, but I love holy art, too. I call poetry, "heartspeak" but the same word applies to your artwork. May God continue to inspire you!

May I suggest you consider making high-quality prints available? I for one would love to have an opportunity to purchase such a print. You may even consider giclee prints which are very affordable now.

Terry, very beautiful retablo. I am Peruvian by birth and recently discovered the Cuzco style artwork. Your version depicts the style quite nicely.

Very nice, Terry. Soothing and rich colors ... gentle, but there seems to be a haunting sadness carried within the images too

Beautiful work, my friend!! You did an exceptional job with this piece. I especially detect the grasp of Joseph's hand by the child Jesus. I look at the painting and "feel" the graps.

Also, Terry, please forgive me if I'm sticking my nose in an aspect of this piece that it doesn't belong. But is that your face I see as St. Joseph?

Thanks very much everyone.

Adrienne - I don't know about reproductions.

Tom - you point to a common phenomenon - many naive painters seem to paint their imaginative figures to look like themselves - albeit unconsciously. I notice it especially with iconographers - I usually recognize the artist in their icons. However, in this case I used a painting of a Spanish nobleman for a reference - althogh not an exact reproduction. Thanks for your kindness.

Thank you, Terry. I just mentioned it because it's a very common practice among artists.

Your work is beautiful, and I'll be satisfied with just coming close to the quality of work you produce.

Beautiful! I think St Joseph looks very much like you.

Gette - I think he looks more like Fr. Mark of Vultus Christi.

I'm speechless -- this is so beautiful.