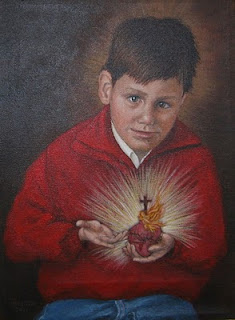 I found a photo of a little Hispanic boy whose facial expression seemed rather intense - reminding me of the Child Jesus. I decided to paint him holding his Sacred Heart. The Child Jesus is said to have appeared as an ordinary young boy to some saints, who at first did not recognize him. I concluded that he most likely appeared disguised as an ordinary boy dressed in the clothes of the period, until he revealed that he was indeed the Christ. Teresa of Avila and Lucia of Fatima had such experiences. When the Child Jesus appeared to Teresa he asked her, "Who are you?" She replied she was Teresa of Jesus, and asked the boy who he was, and he replied, "I am Jesus of Teresa." Hence the title of the painting.

What a sweetheart! (Pun not intended.)

I'd buy this if I could afford it, Terry. Believe me when I say I really wish I could.

At first I didn't like it, but the more I look at it, the more it grows on me.

There's nothing I do not like about this. I am not normally one for religious figures, especially the Divine, in contemporary clothing - I'm afraid as a post-evangelical I've just seen too much ... I'll leave that thought there and say, but in this case the matter of Jesus appearing to bona fide saints as a normal little boy makes the imagery valid.

One a different note, arising from Enbrethiliel's comment and not intended as a put down of Enbrethiliel: Why do people always assume they can not afford to purchase our art? Why not just ask, --are you selling this; how much? So often we would be more than willing to meet some middle ground, or, as in my case, I usually under value my work so much that in fact, anyone can afford it.

I imagine such a statement intended as a form of a compliment, still...

"[U]ntil he revealed that he was indeed the Christ."


I'm thinking of it a the child version of Caravaggio's "Dinner at Emmaus."

I love intensity of the Child's eyes. They're piercing but not at first. Beautiful

I can relate to the Child Jesus in a J.C. Penny or KMart wardrobe far easier than I can in a foppy Rennaissance outfit.

Thank you, Terry. I think you have a theme you can work with.

Many thanks for the beautiful compliments - I'm now convinced the Child Jesus wanted me to paint this.

Of course He wanted you to paint him! He loves you and wants to spend more time with you!

Owen -- In my case, I'd have to pay for not just the painting, but also the shipping charges. And since the exchange rate between US dollars and Philippine pesos is about $1 to P40, unless it's going for about $50, I wouldn't be able to afford it.

But you're right that I usually just assume I can't afford art, even when the artist lives in the same neighbourhood. Perhaps it's because the only people I know with original artwork are filthy rich or artists themselves. Seriously.

I love this. You're such a great artist.

Hi there! I have been searching for an inspirational image of the child Jesus, and this one has really captured my heart. Is there any way I could print it for use in my office? Thanks!

Anonymous - this is the only image available - but please feel free to copy it. I wish I had a copy, but I don't. I'm happy you like it. God bless you.